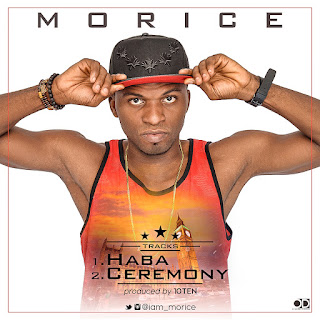 of
Ikeja, Lagos. He started rapping at a tender age back in Junior school
and won lots of awards for his school then. He hailed from Ukpor,
Anambra State.
While growing up
Morice never stopped miming lyrics of famous music stars. A better
reason why you spend few seconds with him & you know he got music
running through his veins.
In 2013
and 2014 he dropped the STAR FROM LAGOS MIXTAPES which enjoyed heavy
downloads and became favourites on our playlists. We waited for an
official single off the act and here it is. Two official singles from
the the versatile rap act. Produced by close friend, music producer and
artiste 10Ten and Mixed and Mastered by HolyDope.
The
24year old act recently collaborated with a popular artiste, but that
comes to our playlist later this year. Keeping fingers crossed while we
bumped on this fresh sounds.
HABA is about the how he feels for this damsel and how he wants to start a new future with her.
CEREMONY
a dance track where he calls himself AFRICA RAPPER NUMBER ONE been
hopeful that when he gets to his peak as an artiste everyone is going to
merry with him.
I think I love his pidgin flow, listen and download. Morice is here.
DOWNLOAD AUDIO:Morice – Haba​
DOWNLOAD AUDIO:Morice – Ceremony
Music