Home Uncategorized Dear Men, Ladies Like These Will Make Your Life Miserable
Uncategorized

Dear Men, Ladies Like These Will Make Your Life Miserable 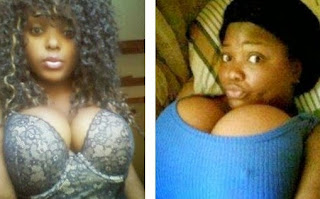 Forget boobs, bad girlfriend will be a bad wife. Don’t experience it, leave her early for your own good.

Men are falling into the hands of wrong ladies these days; ladies who
don’t fear God, don’t have respect for anyone, not even their parents.
This piece will help you spot such ladies and back off on time.

After all, we’re all different and even if we’re perfect by ourselves,
we may not feel so perfect in the arms of someone who isn’t right for
us. Compatibility matters a lot for a successful marital journey.

How to know if she’ll be a bad girlfriend and terrible wife…
When a girl who don’t like bathing begins to insist you give her a “head”, you are with the wrong one.

You may have read many relationship tips on how to be a great boyfriend
or husband, and you may even think you’ve got what it takes to be the
ideal mate. But no matter how nice, understanding and perfect you are,
at times, the person you’re dating could ruin the whole experience of
love for you.

It’s not their fault really. Sometimes, a few girls you date may not
realize they’re doing something wrong, or worse, they may assume they’re
right because no one in their family was able to tame them.

The easiest way to know a girl you’re dating is a bad girlfriend potential is by trusting your instincts.

It doesn’t take more than a couple of dates to know if both of you are compatible with each other.
The first date is a great litmus test, but considering the odds that the
girl you’re dating may be troubled by a bad state of mind on the very
first date, you could always use the second date to double check.

But if after three months you still feel uncomfortable with her, you’re
better off looking for another lady who is not thinking too big of
herself because she has boobs or any of those stuffs. The obsessive possessive girlfriend. Your girlfriend’s
possessiveness could seem flattering at first, but if she hates it when
you do anything without her, or go out anywhere with your own friends,
you may start to hate that side of her for it without realizing it. And a
girlfriend who’s possessive would always feel insecure each time you
meet another girl, even if it’s just a friend. And before you know it,
both of you would be fighting every time you go out or meet anyone.

The user. There are a few girls who see you as a great guy who
could introduce her to a better world. You may be the guy who’s got a
lot of connections, or the guy who’s running a potentially big business.
And she may believe that her being with you is her ticket to enjoyment.

The relationship could start out perfectly, but within months, you may
find that she’s more eager to spend your money than make any kind of
plans with you that will better your future together.

The unapologetic girlfriend. Are you dating a girl who just can’t
apologize or admit her mistake? She may apologize in jest for trivial
things, but for the things that really matter, she would prefer to give
you the silent treatment than accept her fault?

This is a scary kind of girl to date, because she may seem like a sweet
girl who’s a lot of fun. But in reality, she is extremely egoistic and
arrogant. She believes she can never make mistakes, and she’s too proud
to ever admit to a mistake. Such a girl would break you in the long run
if you don’t quit.

The whiner. This is the kind of girlfriend who always whines. She
complains and never has anything good to say, no matter how much you
spend on her she will still have one money she is expecting from you. If
your girlfriend can’t ever just see the good side in you, just quit
before it’s too late.

The confused girlfriend. This is the type of girlfriend who just
doesn’t know what she wants. She’s always confused between choices and
is almost always unsure about any decision she takes.

She even flirts with other guys constantly and probably sees you as the
standby boyfriend who she calls when she’s not getting attention from
anyone else. Dating this kind of a girl is a disaster.

The dominating and demanding girlfriend. She’s the kind of girl
who is full of expectations and demands all the time. She’s a control
freak and always wants things done her way. She’s bossy and expects you
to do as she says all the time. You may be a nice guy who cares for his
girl, but for this kind of a girlfriend, that’s not enough. She wants to
dictate and control your life. Just quit already!

The too opinionated girlfriend. This type of a girlfriend takes
it too far. She’s got her own opinions and she’s too rigid to change it
no matter what you say, or even if she’s wrong. She changes her mind
only when she wants to, or if her friends or mother convince her. But no
matter how hard you try, she just doesn’t trust your opinions or
suggestions.

The sneaky snoop. She snoops on you all the time, the very second
she gets an opportunity to do so. You may be loyal and truthful, but
she still sees a reason to doubt your intentions all the time. She spies
on you, looks through your cell phone, tab, etc. She won’t trust you
because she probably has trust issues. Please avoid dating a girl who
has trust issues. It’s not healthy for a happy relationship.

The I-make-you-insecure girlfriend. This kind of a girlfriend may
be a nice girl, but she’s too flirty. She gets really friendly with
guys, even if he asks her out. She goes on dates with other guys even
though she’s dating you exclusively. And you see her flirting with some
guy or the other all the time. And even when you point out that a guy
she was talking to was trying to hit on her and ask her out, she
pretends not to have noticed!

Dating a girl like this will leave you frustrated because those in this category hardly change their ways.

The martyr girlfriend. This kind of a girlfriend resorts to
emotional blackmail and manipulation to get things done her way. She may
be very helpful and sweet, and may even go out of her way to be nice to
you, cook nice meal, etc. But when she wants something, she uses
emotional blackmail to twist your arm and get back at you. She may
constantly use lines like “I do so much for you…” “After all I’ve done
for you, can’t you do this little thing for me…?”

The parents’ pet. This girl is very close to her parents,
especially her mom. And no matter what you say or how much you try to
convince her of something, she can’t ever do it without bringing in her
mum. You must leave her, otherwise they will use jazz to marry you,
especially if you have some cash.

Chronically dissatisfied girlfriend. She constantly compares your
lives with others, especially when they’re doing something fun. She
logs onto facebook, sees all her friends who are vacationing and whines
about how unhappy she is, or just how busy you always her. No matter
what you do or where you take her, her happiness is always only
momentary.

She may be happy for a few hours, but as soon as she sees a friend doing
something, she starts comparing her own relationship all over again.
Believe me, this type of a girlfriend will drain you.

If your woman has these traits in her, talk to her about it. And if that
conversation doesn’t fix it, it’s best for you to walk away before she
makes your life miserable. These types are many on the streets.