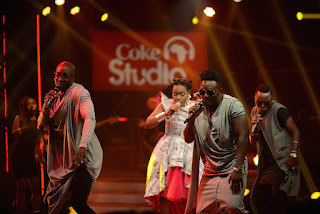 The ‘King of Queens’ Yemi Alade Rocks Coke Studio Africa Collabos with Top Kenyan Acts
Straight
after being crowned the Best Female Artist in Africa at the 2015 MTV
Africa Music Awards – “Nagode” and “Johnny” singer – Yemi Alade is
back on Coke Studio Africa TV Show for a second time! This year, Yemi
has been paired with top Kenyan acts representing afro pop and genge
gernres. She has collaborated with Jua Cali and Sauti Sol on the TV show – set to premiere soon.
Yemi Alade, still in Nairobi – Kenya, has worked on a Coke Studio Africa mash-up collaboration with Sauti Sol –
successful Kenyan music group, who recently attracted international
media attention after having President Obama dance to their song Sura
Yako, during his visit in Nairobi. Yemi and Sauti Sol collaboration has
been produced by Cobhams Asuquo, who has also produced Avril and M.I on
the show’s new season. The product of the collaboration was such magic
that Yemi and Sauti Sol headed straight to the studio to record another
song, right after their recording at Coke Studio Africa.
Yemi has also worked with Kenya’s genge king – Jua Cali, also known as Baba Yao, in song collaborations produced by respected Nigerian producer Masterkraft – who has also worked with several top Nigerian acts including Flavour, Banky W, Olamide and
Wizkid.  Yemi is a masterful performer and known for her well
choreographed dance, and flamboyance in African fashion and music.  Yemi
had great chemistry with rapper Jua Cali too. The rapper, a first-timer
on Coke Studio Africa, has mega Kenyan hits like “Ruka”, “Kiasi” and
“Bidii Yangu”. The two have had their music produced by Nigerian
producer Masterkraft in the show’s new mash-up format. Yemi’s
“Tangerine” and Jua Cali’s “Kwaheri” include some of the songs that have
been mashed up. Music fans across Africa will listen to them first on
the season premiere of Coke Studio Africa!
At
an exclusive media meet and greet, Jua Cali said, “Coke Studio Africa
is a huge thing for me! It will make me up my game. I’ve only rehearsed
at the studios for a few days and I’ve learnt a lot and picked up on
stuff. I want to work with Masterkraft in my upcoming album and Yemi on a
remix of one of my songs.”
About Coke Studio Africa

Sauti
Sol, Yemi Alade and Jua Cali are among a crop of Africa’s most talented
musicians and producers selected this year to feature in upcoming new
season of Coke Studio Africa. The superstars represent
a great wealth of music from Kenya, Tanzania, Nigeria, Mozambique and
Uganda. For the first time these artistes will collaborate in a unique
format of mash-ups – the latest trend in the global music
industry. “A celebration of African music” being its core
element, Coke Studio Africa’s new season will feature performances
and collaborations from 28 popular African artists and American
singer/songwriter Neyo – all have made a mark on the global music scene.
Gist