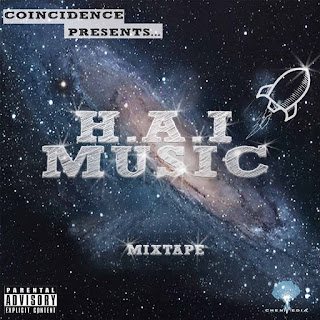 After the success of their concert & EP: “This Is Nigeria” (hosted by
Chigul), as well as Singles successfully released in 2016, Coincidence
group presents a Mix-Tape tagged “H.A.I. MUSIC”
(Hip-Hop/Afro-Alternative/Inspirational Music). [Pronounced /: high/]

The group of 4 made their debut Nov. 2014 and is based in Abuja City.
This body of work is a must-listen with 12 songs that define their genre
of HAI music, trigger waves of excitement and in some sense fright on what
will come next from the super collective! Features Include OZONE of
Aristokrat records, UCEE of A.P.E., KIID-PRO, JAY-O, FIZZY-K, FAITH &
VINO. “Blah-Blah” a song on the mix-tape peaked at No.3 on the AbujaTop10
countdown. Member, composer/producer/writer “BBK”, produced all tracks.
COMPOSERS: BBK/LAXY/DEMI/HERC
MIXING: DRILL/UCEE/VINO